On Monday 7th August 2017, the Red Top Bulls swam a three man relay across the English Channel from England to France.  The crossing was 34 km from Samphire Hoe, England to Wissant, France.  We successfully completed the swim in 10 hours 42 minutes.  The water temperature ranged from 15 to 17 degrees.

The Red Top Bulls team consisted of Arvids Friedenfelds, Elliot Newsome and David Roche (all from Red Top Swim).  It was an official crossing, regulated by the Channel Swimming Association (CSA).  Following strict rules and under independent observation, each swimmer swam for one hour then we rotated.  The same swim order was kept for the duration of the swim.

The following chronological updates were tweeted during the swim by our coach, Tim Denyer (@CoachTimSwim).

“Red Top Bulls have started their English Channel swim onboard Viking Princess! Chop from rebound will settle down.”

Audio commentary: “Hey, guys, this is the Red Top Bulls.  They’ve just started off with Arvids Freidenfelds.  Starting off the first swim, just starting off here Samphire Hoe.  It’s pretty choppy out here, pretty lumpy and bumpy but we’ll be alright.  Arvids is a good swimmer, good swimmer and then after that we’ll be heading into Elliot Newsome, David Roche.”

Audio commentary: “Okay, so we’ve just given Arvids the sign for 15 minutes to go.  His stroke rate’s increased a little bit as you can see.  Still pretty slow stroke rate.  But don’t be fooled, this man is long and strong.  Very, very, very powerful in the water.  Still holds a Latvian record.  4 x 200 relay.”

Audio commentary: “This is Elliot Newsome, second swimmer for the Red Top Bulls, pushing out nice and smoothly in some pretty choppy conditions but it’s not too bad.  Coming a long way now on this flood tide moving out from Samphire Hoe.”

“David Roche (Swimmer 3) is in the water! Won’t be too long before we’re in the SW lane.”

Audio commentary: “David Roche, third swimmer is in the water now for the Red Top Bulls.  Going in nicely, he’s getting a little bit of chop off the front of the boat here. Still a slight west swell.  9 mile an hour south west wind.  And we’re coming in through the… up towards the shipping lane, coming through English inshore waters now. Making good progress… very good progress.  Overtaken three boats so far.”

“2hrs 35mins into the SW lane. Excellent progress! Taking the pain out the flood tide & keeping us on target track.”

“Definitely in the SW lane!”

Audio commentary: “Excellent progress here with Arvids, into his second leg.  Two hours thirty five in the south west lane.  Great swim from Rochie there and now Arvids in with this nice strong section here.”

“Arvids is out and Elliot in for his 2nd swim! Great pace across the SW lane.” 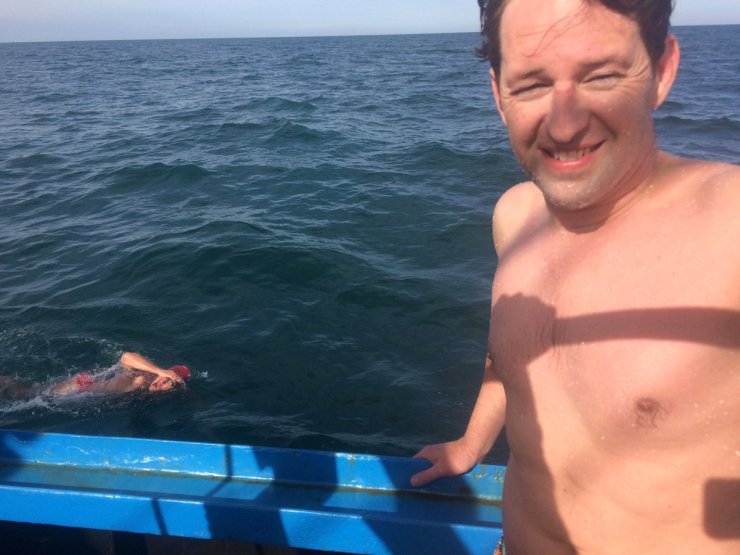 “Rochie is pushing it thru his hour. Just entered the NE lane in 5:20. Excellent pace (& beating the other boats 😜)”

“The Bulls are rampaging!!! Arvids is in for his 3rd hour. Sea state calmed hugely. Wind continuing to drop. Bonza!”

“8hrs 15mins and the Red Top Bulls are into French Inshore Waters!”

Audio commentary: “Okay, so we’re coming towards the end here.  Arvids is having a great swim. Final, fourth leg for him with a bit of luck.  There’s France over there with The Cap just down there in the corner.  Hopefully this will be Arvids’ last swim.  This is taking us into the… this is the tenth hour.”

Audio commentary: “Here’s Arvids in his final stint and he is absolutely smashing it.  Effortlessly.  He’s really, really smooth in this.  Putting so much power there.  Beautiful long hip-driven stroke.  Quality, quality swim.”

“Elliot Newsome on his final stint, making an assault on the French coastline! Going for sub 11hrs.”

Audio commentary: “Elliot Newsome doing his final stint now. With a bit of luck we should be finishing in about… maybe 40 minutes which will bring us into the swim sub 11 hours.  He’s absolutely pushing it.  He wants to be the one to finish.”

The CSA have officially recorded our swim as follows:

Records of all successful English Channel crossings are kept on the dover.uk.com website.  These include crossings from both major associations (CSA and CS&PF).

At the time of writing, there have only been 3,816 successful crossings, both solo and relay (more people have climbed Mount Everest).  There have been approximately 1,500 relay swims and the average relay crossing takes 12 hours, 43 minutes.